We, a 34-person art army, marched through the Deitch ArtParade in unison while carrying flags, banners and a thirty-foot snake. The army was outfitted in a uniform of all black with a red medallion, armband and a star with an image representing their spirit animal. A front’s man carried a boom box blasting music such as P-Funk and Earth, Wind and Fire as well as a drummer that kept us in extra-tight step. That’s what got us pumped yet focused, and most important -- in harmony with one another. Our brigade was semi-trained to dance like an undulating reptile; both a move of seduction and of fierce combat intention, the finale included showing our true firepower with sparklers and confetti poppers.

Historically, parades had been used as a way to celebrate soldiers coming home, to present the power of a government and to unify a demographic. We were interested in combining the notion of an artist as the ultimate independent worker against the very real necessity of community and the questions of compromise that that brings up. Additionally, we were interested in the history of the parade and it as a manifestation of the glorification of the principles of a country. Given that at the time, the U.S. had been at war in Iraq for 3.5 years and lost at least 50,000 lives and 20,000 injured, we thought it appropriate to make a piece that lasted only a day in order to defend the sanctity of our values. Shifting that to the context of the artist, we wanted to bring up questions of what should be glorified externally by the artist community. 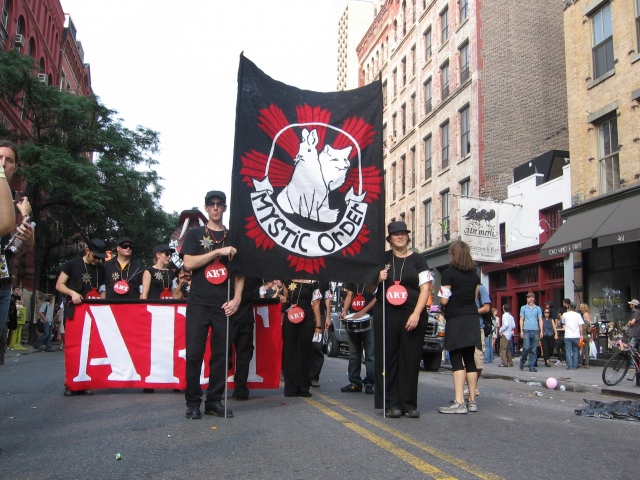